The Difference Between CBD and Kratom

Cannabidiol (CBD) isn’t the only natural pain relief product available on the market today. Another natural pain relief option is Kratom, a tree species found in Southeast Asia. This product becomes so popular that the federal government even took notice of it.

As for now, Kratom is still legal to use in many US states. People use this natural product to alleviate certain medical illnesses, such as arthritis, anxiety, and fibromyalgia.

So between CBD and Kratom, which is better? In this article, we’ll point out the differences and help you choose the right one for you.

CBD is sourced out from the cannabis plant. It’s a compound found in both hemp and marijuana, although many CBD is produced from hemp for legal purposes. The oil is extracted in various methods including CO2 extraction and the use of solvents (e.g. ethanol or butane). It’s then processed and sold in different forms such as capsules, tinctures, and edibles.

Since CBD oil is produced from the whole plant, other cannabinoids and terpenes can come along with it. These are known as the full-spectrum CBD products. CBD is quite potent on its own but it becomes more effective when consumed with THC and other cannabinoids. The law requires all full spectrum CBD oil products to limit the THC amount to 0.3%.

Make sure to understand the benefits of CBD if you don’t already!

If you’re concerned with the use of THC, then the CBD isolate is a great choice. CBD isolate is sold in its pure CBD form and contains no other cannabinoids or terpenes. Just like the full spectrum, isolate CBD is available in different products, including gummies, vape liquids, and tinctures.

Kratom is a tree that has leaves which can be used for medicinal purposes in Southeast Asia. There are over 40 compounds found in the plant including two alkaloids that are under careful examination: mitragynine (MG) and hydroxymitragynine (7-HMG). These two alkaloids work similar to the interaction of CBD and THC. While MG is therapeutic, 7-HMG is psychoactive. 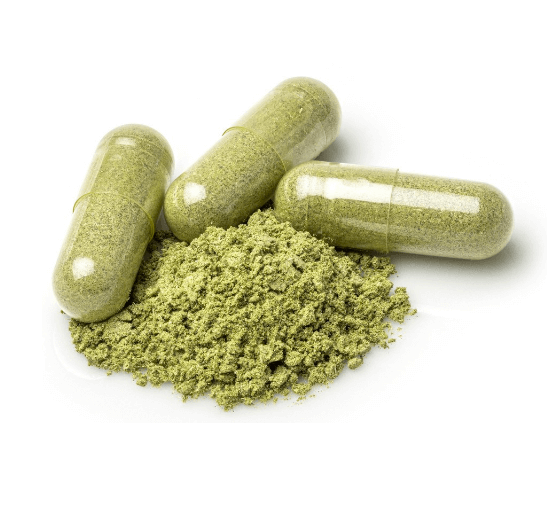 7-HMG may be less dominant than MG in Kratom but this psychoactive compound works like opioids in the brain receptors. This puts the legality of the plant at risk.

Kratom is usually dried, ground, and produced as capsules. You can also ingest it raw or boil the leaves to get its extract. The extract tends to last longer than the dried form.

One of the main benefits of CBD is its ability to alleviate different forms of pain. Studies have shown that CBD is a good anti-inflammatory product that can minimize pain, swelling, and arthritis. This compound is also found to be good in preventing nerve damage and degeneration.

Research also discovered that CBD can help alleviate neuropathic pain from multiple sclerosis. There’s also a possibility that this product may help reduce headaches and migraines, though limited research is available.  As far as CBD rubs, this one is the top recommendation.

Kratom, on the other hand, lacks scientific evidence to prove its claims. However, this doesn’t mean that it’s not potent. Its popularity is still growing so we can expect more research to be done in the future. One research that you can look forward to is from the University of Florida which currently received $3.5 million dollars from the National Institute on Drug Abuse.

Despite the limited research, there are many good things shared about Kratom. A 2017 review of available medical studies found out that this plant can effectively alleviate pain, helps you relax, and enhance the immune system. More than 90% of respondents from a huge online survey also reported that Kratom was very potent in alleviating pain and other medical problems.

Other Benefits Aside From Pain Relief

Many studies confirmed that the interaction of CBD with endocannabinoid receptors in the body generates various benefits. One of them is minimizing seizures which led to the current FDA approval of the first epilepsy-curing drug, the Epidiolex. There’s also proof that CBD can help improve sleep problems and post-traumatic stress disorder because of its anti-anxiety properties.

Kratom, on the other hand, is seen to have the potential to treat opioid addiction. A recent study found that that Kratom contains mitragynine, a compound that minimizes opioid abuse. It also appears that this plant can help treat depression, though further research has to be made.

While mitragynine may reduce opioid abuse, the 7-HMG compound works like an opioid which means that Kratom still has addictive potential. That explains the negative scrutiny of the FDA. In fact, a 2014 survey found out that almost all of its participants displayed symptoms of addiction after using Kratom for more than six months. Such signs include anger, sleeping problems, and pain.

Other side effects of Kratom include nausea, dry mouth, and loss of appetite. In some rare documentation, people reported severe side effects which include seizures, psychosis, and liver damage. Overdose on Kratom is possible but at a very high dosage.

Another interesting fact of Kratom is its implication in 44 deaths, according to the FDA. Many supporters believe that this is an act of deliberately insinuating public fear, as Kratom was consumed together with other drugs in almost all of these cases. However, it still implies that Kratom could be really menacing especially if consumed with other substances.

Kratom’s credibility is again damaged when a salmonella outbreak was linked to its products in 2018. The said outbreak made 199 people become ill in different states. Consequently, the FDA recalled many Kratom brands that were affected with salmonella.

CBD, on the other hand, seems to be very safe. There are only mild cases of drowsiness, nausea, and dry mouth reported among users. In addition, the World Health Organization (WHO) proclaimed CBD as non-addictive. Of course, the lack of supervision may cause potential problems, such as fake products and contamination.

These problems can be avoided if you buy Kratom or CBD products from reliable retailers who follow safe production processes. Trusted vendors detail the ingredients and production of their products, just like Every Day Optimal CBD. The company uses a third party lab to test their products and shares the results online. It’s also important that you speak with your doctor before consuming any new supplements because CBD can affect the metabolization of other medications.

Legality of Kratom And CBD

In 2016, the DEA tried to restrict Kratom, but the clamor of the public kept the drug legal in most states. The FDA suggested that Kratom should be labeled as a class 1 drug in 2017. This puts Kratom under the same category of heroin and LSD. While the jury still hasn’t decided on the legality of Kratom in the US, several countries like New Zealand and Germany have deemed the drug as a controlled substance. Thailand, Australia, and Myanmar have deemed the drug as completely illegal.

The cannabis origin of CBD has made its legality questioned tremendously. While the classification of hemp isn’t the same as marijuana, the federal laws on cannabis remains uncertain. Depending on the state, CBD products derived from hemp are legal. Other states, like Ohio, offer CBD in dispensaries.

There are a variety of vendors with Kratom for sale online, and depending on what you’re looking for, you’re sure to find one that will suit your needs.

So, Which One Is Better?

Taking everything into consideration, CBD wins over Kratom. It’s safe, non-addictive, and it has many scientific studies backing up its multiple health benefits. One of the best vendors of CBD is Every Day Optimal which produces pure and clean CBD products.

You can expect more evidence of Kratom’s benefits in the future, especially with the rise of research on the substance. However, there’s a possibility that Kratom can be banned with its many similarities with opiates.

Both of these products are available from online vendors and head shops. Some CBD oils are also sold in dispensaries. When buying either Kratom or CBD products, look for a trusted retailer, like Every Day Optimal.