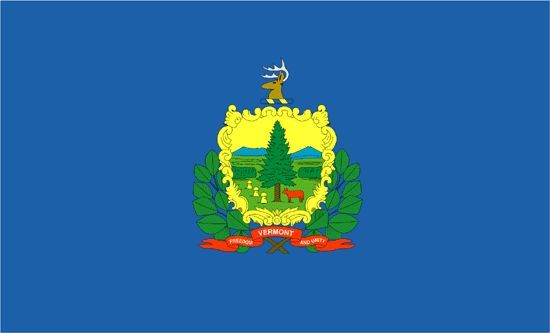 In 1915, Vermont joined the other U.S. states and outlawed marijuana. By 1947, the Green Mountain State implemented the Uniform Narcotic Drug Act (1934) to further control the trafficking and consumption of narcotics, including cannabis.

The following passages shall put light on the marijuana and hemp laws of Vermont.

This Northeastern U.S. state legalized adult-use cannabis through its 2018 House Bill 511 and became the first one in the USA to do so through legislation. Vermonters, at least 21-years-old can obtain up to one ounce of recreational pot besides privately growing six (two mature and four immature) marijuana plants.

The Marijuana Advisory Commission completed its statewide tour in late 2018 to formulate and execute a taxed and regulated cannabis market. Moreover, S. 54 – the bill which would form Vermont’s Cannabis Control Board was passed by the Senate earlier in 2019. In May, the House Government Operations Committee legitimized the bill through a 10-1 vote.

The Green Mountain State is slated to earn a cool $64 million by 2022.

Since 2004, Vermont has a well-functioning medical dispensary system. In 2014, Vermont expanded its medical marijuana laws to remove the cap of only 1,000 registered patients. Two years later, a legislative amendment enabled dispensaries to commercially trade with one another. The revisions also called for child-resistant cannabis packaging and an increase in the number of qualified medical conditions. A year later, another bill was approved to add Parkinson’s disease, PTSD, and Crohn’s disease to the qualifying conditions.

As of now, there are about 6,000 registered patients in Vermont. When the patient-count hits 7,000 a new dispensary will be added to the five already functioning statewide. The state earned $22 million in medical sales in 2018 and is slated to make $44 million by 2022.

The Vermont Senate Bill 157 of 2013 revised regulations statewide to allow the Secretary of Agriculture, Food, and Markets to mandate registered growers to cultivate industrial hemp as an agricultural commodity. Today, hemp is grown by local cultivators registered with the VAAFM – Vermont Agency of Agriculture, Food & Markets. The year 2018 witnessed statewide plantation of 1,820 acreages of hemp.

Nonetheless, the approval of the Agricultural Act of 2018 will have no immediate effect on Vermonters growing industrial hemp.

Vermont legalized recreational marijuana in 2018 to allow adult Vermonters to obtain up to one ounce of weed besides privately growing six (two mature and four immature) marijuana plants. The state is expected to earn $64 million by 2022.

Vermont has a well-functioning medical dispensary system that serves about 6,000 patients. The state will establish a sixth dispensary when the patient-count will hit 7,000 The state is slated to earn $44 million by 2022. Lastly, the year 2018 witnessed the cultivation of 1,820 acreages of hemp in this Northeastern U.S. state.