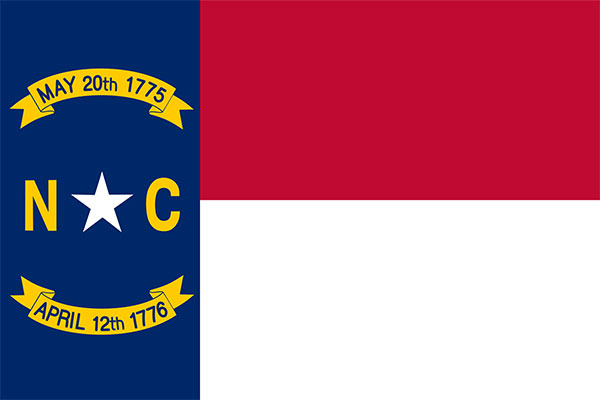 The history of marijuana in N.C. dates back to 1977, when this southeastern U.S. state enacted decriminalization laws to protect people from getting arrested for possessing small amounts of weed.

The following passages will elaborate on the marijuana and CBD laws of North Carolina.

Cannabis is classified as a Schedule VI substance in the Old North State, and carrying an ounce can put you away for 45 days with a $1000 fine. An intent to distribution carries a minimum 25 months sentence while trying to cultivate up to 10 lbs of weed is a felony penalized by 4 – 8 months incarceration.

Although North Carolina is one of the 23 U.S. states to decriminalize marijuana possession arrests, law enforcement is racially motivated. According to ACLU, while African-Americans constitute 22% of the North Carolina population, they account for 50% of cannabis-related citations or arrests, despite them and whites using marijuana at similar rates.

The year 2017 saw as many as three bills namely, HB 185, SB 648, and SB 579 getting filed in North Carolina to secure North Carolinians with debilitative medical conditions. The legislation proposed a cannabis extract carrying minimum 5% CBD, and a maximum of 0.9% THC. However, none of the bills saw the light of the day.

In March 2019, The North Carolina House of Representatives filed a bill to statewide legitimize medical marijuana. The bill proposed, HB 401, would form the Medical Cannabis Act. It would safeguard state residents with a registry identification card, and their caregivers and physicians, from arrest and prosecution.

Initially, the 2014 N.C. CBD-focused law (HB 1220) allowed the use of CBD only for the condition of intractable epilepsy. The next year, Senate Bill 313 authorized the study and cultivation of industrial hemp in the Tar Heel State. The bill also created the North Carolina Industrial Hemp Commission to coordinate research efforts with the concerned stakeholders.

Nonetheless, the approval of the hemp-friendly 2018 Farm Bill is ramping up efforts in North Carolina to expand the state program. In the N.C. annual Farm Act, local lawmakers have expanded the pilot hemp program to take benefits of the Farm Bill. In 2017 – 2018 hemp grown across the state ballooned from 222 acres to 8,000 acres. North Carolina also accommodates 3.4 million sq. ft of greenhouse space.

Adult-use cannabis is illegal in North Carolina, and carrying an ounce can put you away for 45 days with a $1000 fine. Moreover, the state’s law enforcement is racially motivated with African-Americans accounting for 50% of the possession arrests despite being only 22% of the state population. The Old North State is expected to get a Medical Cannabis Act in 2019 with House Bill 401 being filed by the House of Representatives in March 2019. Lastly, in 2017 – 2018 hemp grown across North Carolina blow up from 222 acres to 8,000 acres.