Martha Stewart Gets Into the Cannabis Business

The 77 year old Stewart is well known for helping people with all sorts of household issues, but now, she’s going to take her brand into our space, as she’s partnered with Canopy Growth Corporation.  Many media outlets have reported this, including Forbes and Fox Business.

Folks, we’ve made the mainstream.  We’re here.  I’ve always known we were here, but we’re done with the edgy celebrities, the whackos, and the greedy businessman who enter a market for cash, and we’ve reached a point where someone who could be all of our sweet Grandma’s is now firmly entrenched in our business.  BOOM!

She’s reportedly assisting with crafting a variety of products for animals and humans.

With recreational marijuana being 100% legal in 10 States, with four others right behind them, we’re seeing a huge number of business moves being made in this space.  It’s getting hard to keep up with all of the new launches of product lines, mega dispensaries, and rumors like Whole Foods getting into the marijuana business.  It’s also encouraging that one study has 17% of the US population using cannabis on a regular basis.

Breakdown of Cannabis Users in the USA 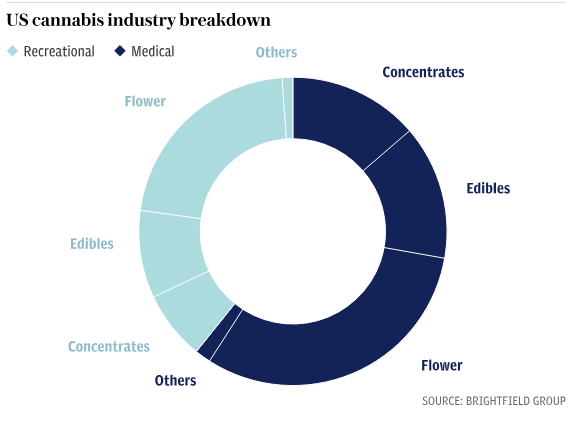 In other mainstreamers joining in the booming market, the former speaker of the House of Representatives, John Boehner, has come onto the board of Acreage Holdings, a business working in cannabis in many states.  He’s been on record stating that he is against throwing people in jail for having possession of small amounts of pot.

Of course, as I mentioned earlier, she has been hanging out with Snoop Dogg, who has his own cannabis line and is a huge pot smoker.  He once famously said he smoked pot in front of the White House!

When pressed for comments, she said that she has been asked to “design recipes an ointments for humans and animals like cats and dogs.”

Related:  find a CBD oil for your cat or dog on this page.

Canopy is headquartered in Smiths Falls, Ontario.  More news on this story as it becomes available.